Houghton Burn tumbled between overhanging flowers and trees. On the other side of the water, fields rose gently to sunlight bathed woodland, a summery breeze swishing through long, lush grass.

‘What an idyllic setting,” I thought. It was a beautiful summer’s day, with my ramble beginning in Houghton-le-Spring. I had taken the footpath to Warden Law, following a tranquil country lane firstly to Field House Farm. From there I was able to wander east, along the edge of the burn. The morning just grew warmer and warmer – though grey clouds were building. After a while I stopped, to pour a cuppa from my flask and enjoy the views. Sipping my coffee, I turned and gazed across fields of long green grass. And the most amazing thing happened. A faint sound, a sort of thrumming noise, teased the air and grew gradually louder. Louder and louder.

And then …. A cloud of starlings sped low over the grass, disappearing into a heat haze. It was quite something to see. Coffee break over I took once again to the trail. The climb to Warden Law North Farm grew increasingly steeper but was worth it for the views. West, I could see Waldridge Fell, as bright as bronze, and then out over Craghead way. A great rim of hills shaded the skyline, summits catching the sunlight.

I wandered along a lane, enjoying the sunshine and the birdsong, burbling all around me. There were skylarks and starlings, thrushes and swallows. The hedgerows were ablaze with wild flowers, all the colours of summer.

The path wound ever on, rising and falling, twisting and turning, flanked by trees and thick undergrowth. I felt far removed from the outside world and all its cares. Instead, I just wandered and wandered, periodically stopping to enjoy a view, a flower, listen to the birds singing. 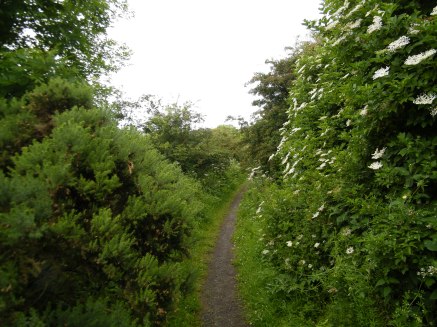 And then the path had left the trees and the hedges behind and there was a complete change of terrain.

I was now following the Hetton-Warden Law Trail. This walking route links Hetton-le-Hole and Warden Law. Like so many such trails this was a railway back in the early years of the Industrial Revolution. The purpose of this one was to transport coal from Hetton-le-Hole to Sunderland. It was the first railway, anywhere in the world, to be designed not for horses but steam locomotives. 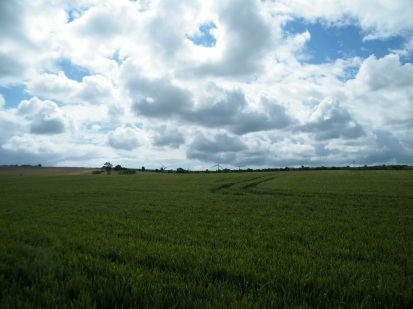 I followed the walking trail across a great green hillside, to Copt Hill. Sleeves rolled up, to let the sun on my arms, I followed the grassy avenue. ‘This is glorious,’ I thought. Those hills to the west … very tantalising, some great walks out there, I decided.

The Copt Hill inn was the venue for my lunchtime break. It’s a pleasant pub, steeped in history. Remarkably, a board on the wall lists all the inn’s owners since the mid-19th Century.

After lunch I crossed the road and followed the Warden-Law Trail to Broom Hill. Then I headed down to the Heddon Bogs Nature Reserve.

This is a worthy day-out in itself, with various paths offering lovely strolling through grassland and trees. Hainton Burn flows through the parkland and there are hints of an industrial past, in the guise of a mill pond. What tales could it tell? I wondered.It had begun raining, rustling in the foliage. ‘This place is quite a find,’ I thought. I had never been here before. I thoroughly enjoyed my walk through some really old woodland, with ash, birch, willow and sycamore. There were wildflowers everywhere, covering the meadows.

I was on the look-out for the bats that live here – not vampire bats I trust – but alas couldn’t see any. There were plenty of birds, flitting about or gliding over the burn. The nature reserve is known for the abundance of Himalayan balsam. This may be a type of weed but I must say I thought it quite attractive. The pink-purple plant is also known as Policeman’s Helmet because of its shape.

It had begun raining, rustling in the foliage and pattering on the water. The trees were really swaying now, swaying and creaking, as the wind built and built.

I was nearing the end of my five mile trek, the final section being to Rainton Bridge. I can recommend today’s walking route. The terrain was varied and the countryside lovely. Well worth it.